Why do rabbits eat their babies!!!!

If you are reading this post you are likely dealing with a rabbit that is eating their babies. For that, I just want to say I’m sorry. It sucks.

So why do rabbits eat their babies?

There are a few main reasons and I am going to go through each of them from the most common to the least common.

Why Do Rabbits Eat Their Babies – Reason #1: She will not be a good mom.

This might sound harsh but rabbits are not all cute and cuddly all the time. Some animals just have a screw loose and that animal should not be bred.

Here are some ways to tell.

There is no reason you can find outside of her control that could cause her to eat them. Things like being afraid, smoke from a bonfire, wild predators that could be posing a threat.

The other clue would be that she is a naturally feisty rabbit. Some rabbits are naturally high-strung but they should not be overly aggressive. (once saw a doe at a state convention that would attach the judge as he walked by her space on the table.)

If the rabbit has not had a litter before and she has eaten one or two but not the whole litter then I would give her a second chance. Sometimes the rabbit just doesn’t know what to do with the litter and all kinds of things can go wrong the first time.

But if she fails the second time. It’s time you think about moving her on and not breeding her.

This is a past doe that totally loved being a momma. She would have the happiest expression on her face when she had babies crawling all over her.

Why Do Rabbits Eat Their Babies – Reason #2: She Was Eating The Placenta

This sounds gross but rabbits eat the afterbirth and placenta. So depending on how vigorous she is in doing so she could very easily eat the baby by accident. (Which is one reason why I don’t want you to call it quits on the doe the first time you see her do it.

The umbilical cord is a decent length but accidents happen.

Why Do Rabbits Eat Their Babies – Reason #3: Something Was Wrong With The Baby

We have to remember that they are animals and it is nature’s way of keeping a species strong. It might seem like she is an awful creature for doing so because we would never get rid of our baby because something is wrong with it.

But as a rabbit owner have to remember they are not humans and don’t have a moral campus.

With that said sometimes a rabbit will eat her baby because it was a sick rabbit or there was something wrong with it. We may never know what was wrong.

But if the doe only ate one of the kits then it is safe to say this was the issue.

Why Do Rabbits Eat Their Babies – Reason #4: Stress

Now I talked about this already a bit but there could be something stressing her out that you don’t realize.

Wild predators are a big cause of this. If the mother rabbits can smell a coon or sense a coyote outside she may eat the kits out of fear of attracting them.

Things like bad storms or fires will cause them to stress out and make them feel like resources are going to be scared which is not conducive to keeping young alive.

Why Do Rabbits Eat Their Babies – Reason #5: Lack Of Protein Or Minerals

Rabbits need a minimum 16% protein in their feed so if you are feeding something that does less than that. Try to feed something else before you breed the doe.

What I have also done for the past few years, and has really helped with the success rate, is adding electrolytes to the does water as soon as the litter is born.

This helps a lot if the litter was large and the doe seems worn down from the delivery.

Should I Remove My Rabbit’s Babies?

If the rabbits are still fully on milk the kits will grow best if they are fed by the doe.

If the doe has not seemed to abandon the litter ( which could be a possibility) you can do what it’s called shelving.

You take the nest of babies and keep them somewhere warm and safe and only take them out to the doe when it is time to eat. Ideally twice a day.

If you think about wild rabbits they are not with their litter 24hrs a day. The mother rabbits feed their babies and then leave. This keeps predators from finding the nest because they are at the bottom of the food chain.

So feeding the kits once or twice a day will be just fine.

If the doe has only eaten a kit or two at birth or within a few hours of it then I would leave the litter with her.

But if she raised them for a few days then starts eating them. Then I would definitely remove the babies if she has done that.

While it is very rare at this age but if the kits are eating solid food then 100% yes remove them from her cage if she is being ill-mannered toward them.

Why Does My Rabbit Keep Killing Her Babies?

Unfortunately with domestic rabbits, we can’t ask them why they do what they do.

Before you think the mother rabbit is doing it on purpose I want you to read this post.

Depending on how big your rabbits are they could be stepping on their kits by accident.

Rasing french lop rabbits ( which are considered a giant breed) this is a very common assurance. Once I started giving my female rabbit a larger nest box to deliver their litter the number of losses got significantly less.

As rabbit breeders will still need to keep a very close eye on the litters. So if you notice that the litter is in the middle of the nesting box then move them over to a corner that is out of mommas way. For more nest box tips read this post.

How Can I Prevent My Rabbit from Eating Her Babies?

Here are my best tips for having a successful litter and keeping the doe from eating her babies.

Will a Male Rabbit Eat His Babies?

First off NEVER leave the male in with the female rabbit after she has been bred. And to be honest, unless your pet rabbit is fixed they should never be together ever. Rabbits have very high territorial instincts and will attack each other if they feel threatened.

That is a rant for another time, so I will stop there.

With that said the male rabbit is not likely to eat his babies. But also keep in mind that the father rabbits do not have a paternal instinct.

The male rabbit will not take care of the rabbits like the mother bunnies do. He can not feed them and won’t deal with the rabbit’s fecal matter like the mother does.  So there is no benefit to him being with them.

Another reason to separate him from the rabbit’s mother is because he can get her pregnant within 24hrs after giving birth. There is also nothing stopping him from mounting her while she is pregnant and this can cause a loss in the unborn litter.

The kits could also be hurt by him if he sees them as rivals and as a threat to survival. Wild rabbits are not all the different from domestic rabbits. They do not live in packs or herds. They have their own spaces and come together to mate.

So forcing something out of nature’s way is never going to end well.

Do Rabbits Eat Their Babies if You Touch Them?

I have been raising rabbits for 18 years and have touched my new litters from day one.

I will say that one thing you should watch for is how the mother rabbit behaves. She could be very protective of her babies and you do not want to be the cause of her acting out and you or the kits getting hurt on accident.

If you want to touch the baby rabbits soon after the babies are born I would just let momma do her thing while delivering. Let her clean them up and once she seems to have settled down you can check them out.

It is also important to check the litters to make sure there are not dead baby rabbits in the box.

Get The Profitable Rabbitry Playbook

Learn the strategies that I use to make multiple four figures a year in my small 12-animal rabbitry.

Get Your Copy Here! 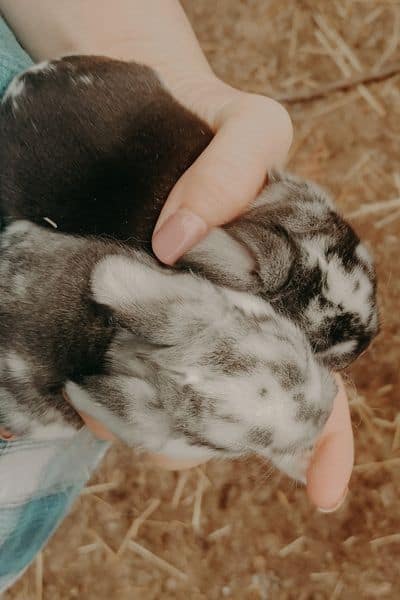