If you love it, help others find it! Share it on social.

Seeing your mother rabbit stepping on her babies is very unnerving.

It’s really hard to control everything in a litter. But there are some things you can do to help if the mother rabbit is stepping on the babies and they are dying.

Keep in mind the older they get the more they can handle so if your litter is a few weeks old you can breathe a bit more.

How To Know If A Baby Rabbit Was Stepped On

Keep in mind that when a doe nurses she stands over them and it can look like she is stepping on them but she really isn’t doing any harm.

The only time you need to intervene is if the mother rabbit has killed a baby by stepping on them.

If the mother rabbit stepped on the baby and killed it the baby will look fairly normal except for the fact that the lower half is very lose. If the baby is a light color you might see some blue and purple color around the midsection indicating internal bleeding.

The baby rabbit won’t look flattened unless it was on a hard surface before the doe stepped on it.

Why Your Mother Rabbit Is Stepping On Her Babies

When you are raising animals you have to learn to read them and the situation to get a good idea of why they are doing the thing you don’t what them to. In this case, stepping on their babies.

1. She is not interested in doing her job in raising the litter.

If this is the case then the litter is likely not being fed and she seems to be totally ignoring the babies. Unfortunately, there is not a lot you can do if a doe has decided not to care for her litter and the best thing you can do is to find a foster doe.

I will often try to breed two does at the same time if possible in order to have one at the ready. Even if the doe can’t take the whole litter she could raise a few extra.

2. She is just a big girl and the litter needs to be in a space where she can jump in and out of the box without landing on the litter.

This is more often the case. The doe does not mean to do hurt the litter. It’s just a case of wrong place wrong time. But some key things you can do to help avoid this is to have a larger nest box.

I make my nest boxes big enough that two rabbits the size of momma could sit side by side in the box. So essentially there is a place for her to jump in and land without the babies being right underneath her.

Sometimes the doe builds her nest in the wrong spot or the babies start balling up together after birth not where momma intended. So you might have to reorganize things. And that’s ok.

Your mother rabbit won’t abandon her litter because she smells human on them. That’s just an old wife’s tail.

Steps To Remake The Nest

What To Do If The Mother Rabbit Keeps Stepping On Babies

If worst comes to worst you can do what is called “shelving” meaning you keep the litter out of the cage where the doe is and only bring them out to feed.

This brings a whole other level of complication to raising the litters. If you are brand new or not feeling confidant than I wouldn’t try it unless it is absolutely necessary.

You will need to keep a close eye on the litter to make sure each one has been feed enough. Possibly hand feed a few of them if needed. And be able to take them out to their mother one to two times every day morning and evening so the doe can feed them.

This is a hard one because the babies are becoming more active. If they are still to the age where they don’t have their eyes open. Most often the babies will come to the surface of the nest if it is too hot to be underneath and very likely be spread out.

This can be an issue if momma comes in the box but most likely she is just as warm and not very active. The best thing to do is leave the babies on top but move them out of the way if there are any laying where she typically lands in the nest box.

When they are a few weeks old and still nursing it can look a little rough but you just have to trust the doe.

Hope that helps. If you’ve got questions leave them below and I will come back to answer them.

If you love it, help others find it! Share it on social. 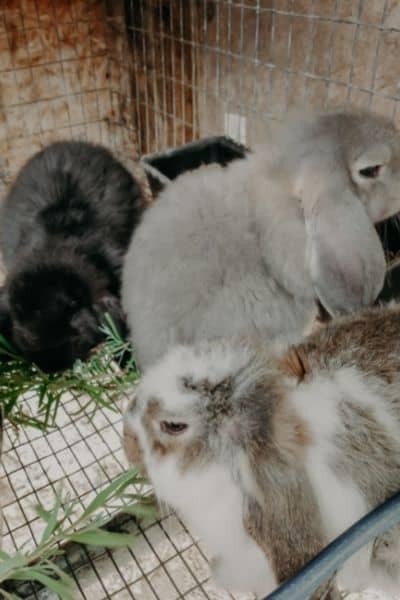