To figure out how to stop rabbits fighting you have to figure out what ticked them off in the first place.

The most important thing you can do while reading through this post has an open mind and understand that I am going off of 18 years of rabbit raising, showing, and breeding experience.

Want to raise rabbits but don’t know where to start?

Get Your Free Guide

NEVER EVER put unfixed rabbits together!!!!!!!!!!!!!!!!!! I am not trying to sound mean but I want you to understand the seriousness of this.

Even rabbits that are fixed must be watched carefully for a long time before leaving them together without supervision.

Rabbits will fight to the point of causing severe injuries or even end up killing each other.

If you have done this don’t feel bad. You didn’t know. There is a lot of miseducation out there and I am here to fix that.

So your rabbits are in mid-fight and you need to stop it.

The first thing you need to do is suck in your emotions and get confident. – The second your rabbits sense your fear or lack of leadership they are going to keep fighting or take it to the next level and totally ignore you.

You don’t have time to be nice about it. You have to stop the fight now.

Hormonal Behavior – Hands down this is the most common reason rabbits will fight for either sexs.

Bucks (unneutered male rabbits)  that are still so young they don’t even know what to do with a doe (female rabbit) will start fighting each other.

Does (female rabbits) will fight over territory for raising their kits.

Rabbits Are Not The Social Animals People Like To Think Now before you blow me off and think I’m crazy hear me out. Think of rabbits in the wild. They do not run in packs or herds. They are only together for mating or you are seeing a momma with her kits.

By the time they reach sexual maturity they are on their own.

Even colony-raised rabbits have their own neutral space they can go to that is their own. And ask anyone with a colony. They still fight each other and are some of the most aggressive rabbits you will come across.

New rabbits and deciding whos’ boss. – Even young rabbits will start to boss each other. I remember the time I had a litter of 8-week olds in the rabbitry. I brought a new rabbit home that I had bought. It was just the same age and I thought I would see if the litter would accept him just to see what would happen.

I stood back and watched but stayed close so I could intervene if necessary. The litter of rabbits was being very rough on him and the dominant rabbit in the litter was bossing him quite often.

So at 8 weeks, rabbits can be rough with each other.

Before you put your new pet rabbit with an existing rabbit here are some things you need to consider.

What was the rabbit’s previous living environment?

Not to mention how stressful a car ride can be if they have never been in one before.

Here is a perfect example of a rabbit going to a drastically new place.

I presently let go of one of my herd bucks (breeding bucks) that was used to living outside in his own cage in a quiet space with just me coming down to see him for his whole life.

The buck when to a new place that had him in a temperature-controlled garage, young children, lots of new people, and a new home in a new state.

That’s a lot of changes.

Some things you can’t control but the thing you can wait on, its best for the rabbits if you wait.

What age is your rabbit? Most rabbits are able to mate around 6 months old.

(This doesn’t mean they should be bred at this age)

But once a rabbit is about 4 months of age they are going to start driving other rabbits out of what they think is their area. When I have litters in the rabbitry I do my best to have them separated no later than 12 weeks old if they are taking time to get to their new homes.

This is often why rabbits will seem fine for a while they all of the sudden start fighting.

Rabbits have different personalities so some are going to react more severely than others. Some rabbits will give a warning while others are not so kind.

If rabbits don’t like something they will often hide their forequarter (front half) away from whatever is annoying them. Often pushing themselves against whatever they are next two whether it is their cage wall or something else.

You are going to be able to tell if it is aggression or them not feeling well is the face they are making.

If their face is furrowed and looking just like they are frowning then they are starting to get mad.

It could be small or very clear. It will sound very much like a cat. It is coming from the inner chest and belly.

Rabbits will either nip and not break the skin but still leave a bruise or they may also break the skin. Either way rabbit bites hurt.

How To Tell If You Have A Naturally Aggressive Rabbit

If your rabbit is showing any of the signs above then your rabbit could be acting out because of the current situation.

That doesn’t mean it is naturally aggressive or a dominant rabbit.

The key way to tell if the rabbit is naturally dominant is how they look in their face and eyes.

They say the eyes are the window to the soul. Well, it’s true with rabbits.

If a rabbit’s eyes are wide and open possibly with the third eyelid protruding. Then this is a good sign they are acting out of fear and is much easier to fix.

If your rabbit looks like the face on the right here in this picture. He is ticked that I am making him sit there. His face is scrunched and the brow is forward.

These facial expressions are subtle but they are there.

How To Tell If You DO NOT Have A Submissive Rabbit

A rabbit that is not a submissive rabbit will not give in to you.

If your rabbit is not wanting to do what you want it to often you will be met with kicking, scratching, and even thrashing.

In this case, place the rabbit on a solid surface like a table with a piece of carpet to prevent them from slipping and hurting themselves.

Then firmly hold the rabbit by the scruff while they are still sitting with all four feet on the solid surface.

Place a firm hand on their shoulders and scruff area like you are holding them down by the shoulders. (Be careful not to put too much pressure so you don’t break their back)

If you have a submissive bun they should old still and relax slightly after a minute or less.

Getting rabbits to be “friends” is basically us humans trying to force nature to work in a way that it wasn’t designed.

Think about wild rabbits. Rabbits are natural loners and only come together with other rabbits for reproduction.

You will also end up with a much friendlier rabbit if you let it bond with you instead of another rabbit.

I don’t know about you but I would much rather have a rabbit be easy to handle and a great pet rabbit.

Great Tools To Use To Create A Neutral Area For Rabbits

Keep in mind neutral area means neither rabbit has lived or been in the space for long and does not deem it as “their” space.

How To Keep Multiple Rabbits So They Don’t Fight.

The best thing for rabbits is to have their own space. They are not fans of constantly being in the company of other rabbits.

If you want more than a single rabbit. Getting a pair of rabbits and only bringing them together to mate (if you choose to have a buck and a doe and are prepared to deal with babies) is best.

If you have two bucks it is best they have their own cages and only bring them out at different times.

Something that can be mistaken for fighting is the natural way rabbits flirt with each other while mating.

This will only happen between bucks and does.

If the doe is in the mood to breed she will sometimes mount the buck herself and hump him. (She is not particular about the body part. It could be the side, back, or even the face.) They will sometimes chase each other in circles while keeping a hold of the other’s back.

See what is going on below.

The doe can seem quite aggressive and come up to the buck, push on him with her front feet, grunt, and run away.

If you want to learn more about the rabbit breeding process you can read this post.

They may stop fighting but is it worth the risk of one of the rabbits being killed or badly injured? Rabbits are very prone to infection which leads to abscesses (ADD LINK HERE TO POST), which can come about very easily.

Is it normal for rabbits to fight

If they are unfixed and not properly watched. Yes. They will fight and it could end in a very serious fight and consequences.

How do you fix aggression in rabbits?

By figuring out what the problem is and removing it or slowly reintroducing the thing that is making them show signs of aggression.

How long should I separate fighting rabbits?

Until you figure out what the problem is and can start working on it with them. 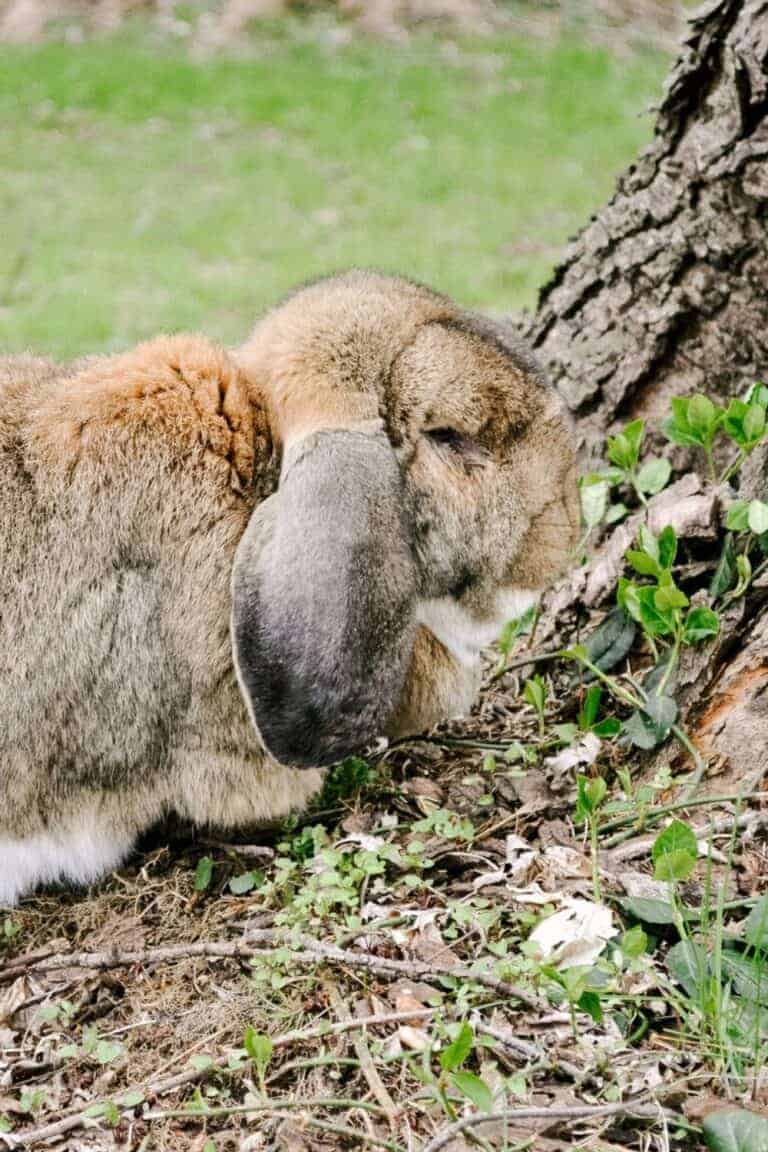